Real Madrid Football Club began their fourth China tour in July 2015, with club president Florentino Pérez personally leading all twenty-eight members of their star-studded lineup. As with previous visits, the tour was much anticipated by Real Madrid’s China fans. What as different this time was that Real Madrid introduced iBeacon technology to target fans who attended their matches with relevant social media content. Once fans had interacted with the beacon broadcasted content, they could enter into a prize draw by sharing it on their WeChat or Weibo social media accounts. Fans who did not attend the matches were also able to enter into the prize draw if they had already been following Real Madrid’s official social media accounts before the matches. The prize draw allowed Real Madrid to thank their China fans for their support, while simultaneously generating social media buzz about their China tour matches and maximizing the impact of their visit.

On July 27th, Real Madrid and Inter Milan played a friendly match with more than 40,000 in attendance at Guangzhou Tianhe Stadium; on July 30th, the club met AC Milan for a friendly at Shanghai stadium, with more than 30,000 in attendance. During the matches, Real Madrid deployed Yunzi beacons (Bluetooth Low Energy 4.0 transmitters) to translate thousands of offline interactions with fans into online ones. This O2O interaction also assisted in reaching Real Madrid’s fans elsewhere in China through social media shares. The use of iBeacon maximized the impact of Real Madrid’s social media prize draw campaign as fans who were present were eager to share with their social networks that they had attended the match, and thus had no qualms about sharing the content to enter into the prize draw. The involvement of these targeted fans contributed to reaching over ten million views of Real Madrid’s content on WeChat and Weibo.

Real Madrid Pioneers Use of Beacons in Football Industry

Long-standing giants of international club football Real Madrid introduced first instance of proximity marketing in the footballing world. The introduction of iBeacon now stands as a benchmark case for innovation in the industry. 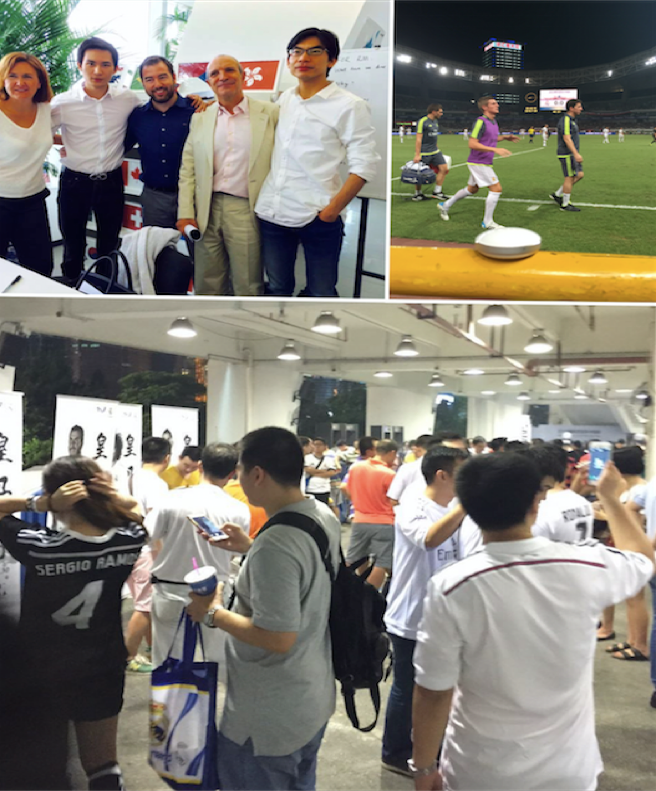 During the tour, Real Madrid focused on getting in touch with their fans. Players made an effort to spend more time with their fans during the tour, and the use of social media followed up on the football club’s ground efforts. Fans were kept updated on tour news and also given the opportunity to participate in the prize draw during the match times.

“We know who we belong to, we belong to our fans, including the millions of Chinese fans to whom we want to give a sense of belonging. We have the largest following of any football club in the world. The honor is not only carried by us onto the football pitch, but also by generations and generations of fans to come,” club president Florentino Pérez said at a press conference before the Guangzhou match.

Sensoro provided the Real Madrid tour with WeChat Shake feature technology. From July 27th to 30th Real Madrid played preseason games against Inter Milan and AC Milan respectively, during which time hundreds of beacons were deployed inside the Guangzhou Tianhe and Shanghai Stadiums in the stands and throughout the stadium tunnels. Event posters instructed fans on how to access the iBeacon broadcasted content. During the matches, participation of Real Madrid fans on social media with the iBeacon content spread so rapidly that viewership of the shared content reached over eight million. Interaction also took place on Real Madrid’s official social media account on Weibo, a Chinese microblogging website whose popularity in China rivals that of Facebook and Twitter in other countries.

Fans at the venue could open their Bluetooth, then use the WeChat Shake Nearby feature, to land on the Real Madrid China tour event page. The event page included various information on the Real Madrid China tour, and could be easily shared on WeChat. Once a user had shared the content, they would be automatically entered into a prize draw for team autographed memorabilia. The landing page also included a QR code for following the Real Madrid WeChat account, improving the efficiency of sharing actions and the frequency of interaction.

During the matches, Real Madrid Football Club’s official Weibo and WeChat accounts simultaneously launched sweepstakes. Football fans participating by sharing the social media content could obtain Real Madrid home shirts signed by all the players, commemorative scarves, and other prizes brought from Spain even without leaving their homes. Fans were excited by the prospect of these valuable gifts, which was Real’s way of giving back to their supporters.

Real Madrid fans visibly outnumbered the fans of the opposing team in each match. With an already huge fan base in China, Real Madrid is looking to expand by exerting more of a tangible presence among Chinese soccer fans. The use of iBeacon’s precise positioning technology to target their most valuable fans and allow them to seamlessly access the tour’s social media content has enabled Real Madrid to accelerate their market influence. Real Madrid sees great potential in the spectator sports market in China and hopes providing a more personal connection to fans will open up the market. The frictionless connection to social media content aided the football club in making the most of their visit to China.

Next High-Tech Wave for the Sports Industry Lies in Accessibility

Real Madrid chose iBeacon to expand market penetration and connect more solidly with their existing fan base. Real Madrid also views itself as the world’s biggest football club and wants to stay at the forefront of market innovation by employing the latest in technology to reach out to their fans. WeChat’s Shake feature in Real Madrid’s China tour case created a new parallel for the high-tech and sports industries and a new model for sports marketing.

The world’s largest network of beacon devices has emerged in China, consisting of 110,000 units run and…

In July, Google launched a new project called Eddystone, a protocol specification emerging as a competitor to Apple's iBeacon…