The Internet of Things appears to be an emerging and cutting edge phenomenon, but it is born from a simple idea - using computers to help us understand our environment. IoT does this by extending a computer’s reach to non-computer “devices” like soda machines, buildings in a city, or even our bodies.

The goal is to gather key data about a device’s state and to improve it by streamlining the infrastructure that supports it. A major challenge with building up an IoT system is “money.” Choices must be made to keep IoT cost-effective and those choices vary widely depending on the application. Let’s look at the goals and challenges of IoT a little more.

Why gather data about a device’s state at all? Here is some elaboration on the examples we just introduced.

Imagine owning a soda vending machine company. Knowing a particular machine's inventory or operational state is essential so that a service tech can be deployed or re-routed to refill or repair it. Having remote access to this data means that a tech doesn’t have to go out there to check it regularly - either finding it full and happy (a wasted trip) or finding it completely empty or damaged (lost potential income). Now, imagine there are hundreds of these machines to manage. Having each unit monitored and networked means each service tech’s driving route can be optimized, saving time, labor cost, and gas expenses. Depending on the degree of streamlining, this may allow the business to expand. 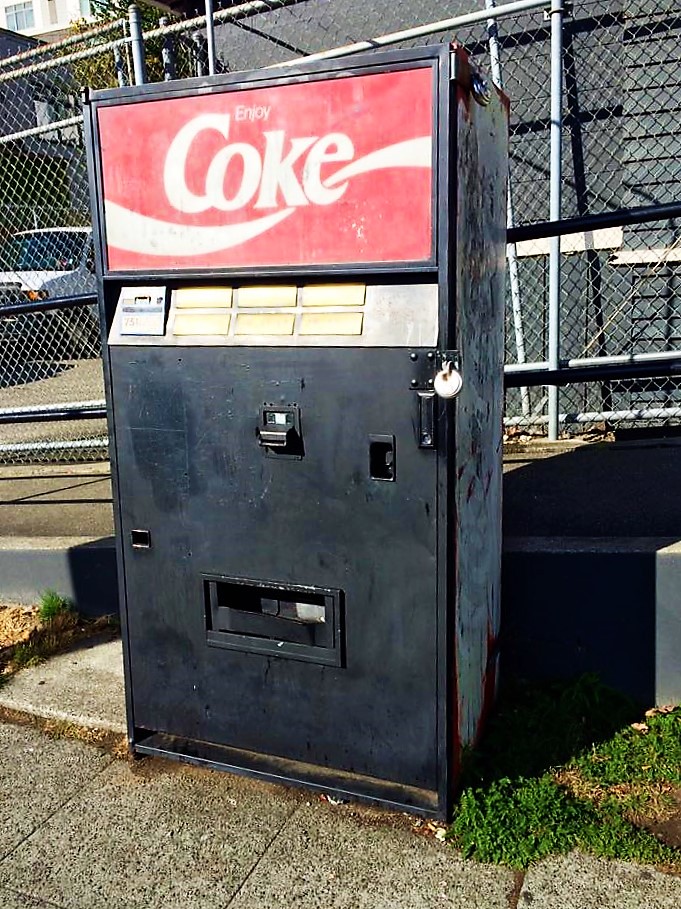 The mystery coke machine in Seattle has its own Facebook page, but that's as digital as it gets. Wireless sensors could bring it up to date.

Let’s look at a major consumer application that is also considered an IoT technology – the fitness band. Monitoring your body with such a device and recoding the data it collects can help you streamline your health. Two examples are recording your average heart rate and sleep habits. While maybe purely curiosity driven, you could turn this data into better habits. If you own a fitness band, and noticed that your heart rate while eating Cheetos on the couch is 90 beat per minute, you might be motivated to start jogging in the morning. Or, if three Red Bulls by 10am isn't giving you wings, you may decide to stop watching YouTube until 2:00 am and get a full eight hours. Of course, these examples may or may not be based on reality.

Let’s zoom out a bit. What about the acclaimed smart city? Measuring temperatures or pollution (particulate matter or gasses) can enable more effective construction projects and optimize use of already limited city resources. A heat map of temperature levels throughout the day would help a city planner know where to place vegetation, which is shown to reduce hotspots in these concrete jungles, and makes the environment much more pleasant. It is not hard to see that a better environment can bring more foot traffic and higher quality vendors - boosting commerce and city income through sales tax. This could also encourage further development and result in reduced crime. A similar approach with pollution measurements would tell transportation officials where and when vehicle traffic is piling up, allowing them to plan better mass transit routes, provide incentives for biking, or to improve roads in only the right places.

The benefits for using IoT devices extend to all industries, but it is important to consider the costs of implementing this technology on a large scale. Implementation means making devices smart, connecting them to a network, and keeping them running.

Getting information from “dumb” devices to a remote computer is IoT at its core. Making devices smart means placing the right sensors on them, so that their various states can be quantified. This isn’t a new concept, but today’s implementation of it is. The Internet, coupled with wireless technologies, allow the remote monitoring of many devices - and this, combined with data storage and analysis tools, means we can finally get meaningful, actionable information. The perspective this data provides brings previously invisible patterns to light and our ability to communicate digitally allows us to respond to that insight almost instantly.

The IoT phenomenon is spreading fast, but the infrastructure needed to use it in industry cannot be built so quickly. Physically connecting things to the Internet is not always possible or cost-effective with existing infrastructures. We won’t be trashing all our soda machines or re-building hydroelectric dams (okay, this would be an extreme case.) But, if IoT costs us more than it promises to save us, we better forget about it. So what do we do to make it happen? Retrofit. Essentially, we need to get sensors onto devices – whether they be machines, buildings, or your body - and connect them to the Internet. Now we need to consider, what is the best way to get online?

Once sensors are connected, we need a way to remotely monitor them and collect their data.

With the right sensors in place, we now have a smart “device.” Almost. The enlightened machine still needs to make its intelligence known by communicating with the outside world via the Internet. There are many ways to do this, but by far the easiest is wirelessly. Wired infrastructures cost loads to install in existing structures, requiring invasive procedures on buildings and machines after extensive engineering and planning. The bottom line is efficiency - we don’t want to lose more money than we could save, or gain, from IoT. Wireless solutions mean smaller changes to the physical environment and many viable solutions already exist - Wi-Fi, cellular, and LPWAN to name a few. The choice of wireless technology depends on the environment and the data being sent. Wi-Fi can handle lots of data, but has limited range and signal penetration. LPWAN solutions encompass many implementations, but are mostly intended for low power devices that transmit small amounts of data. The range and network capacity is great for most sensors, but not for transmitting video or performing real-time tracking. Cellular connections, like hardwired solutions, allow for real-time transmission and high data volumes, but at a cost - each device needs a data line from a cellular carrier. And, unlike some LPWAN solutions or Wi-Fi, one would not own the cellular network and would have no way to extend coverage on their own (in an underground parking garage, for instance.) There will always be tradeoffs, so the choice depends on the both the application and budget. Once connected, however, we need to keep our devices running.

Now, how does one keep these smart, connected sensors alive? Like the communication medium, the power source in many cases cannot be a wired one. This leaves essentially two options: batteries or power harvesting devices. Let’s look at the latter.

There is abundant energy in the environment that surround us in the form of solar, vibration, radio frequency, heat, sound, and more. This energy can be converted to electrical form with power harvesting devices and be used to drive sensors and wireless communication. While excellent for situations where low-power devices need to operate remotely for long periods of time, they are limited to specific environments, and thus, specific applications. As an obvious example, a solar powered sensor must be in the light - it can’t be used to measure conditions in a meat locker (well, not for long.) The energy source needs to be consistently present and intense enough – although this is mitigated in some cases by storing excess collected power in a small battery or capacitor. This means manufacturers would need to develop more specific solutions for a larger variety of use cases. The added design complexity and need for specialization means power harvesting devices will cost more up front. In certain cases, this may be an acceptable trade off, but it is a consideration for those just starting to delve into IoT.

It is more cost-effective as a manufacturer to produce a versatile solution and this means a more cost-effective option for the consumer. Batteries, therefore, tend to emerge as the best of the wireless options. They are simple, cheap, abundant, replaceable, potentially rechargeable, and provide reasonable run times. Additionally, they can be used in almost any environment. The drawbacks to the versatility include increased waste and replacement costs - there may be a thousand devices and someone must replace the batteries eventually. Perhaps, as power harvesting technologies become cheaper, more hybrid solutions will emerge to extend a device's battery life. Until then, the choice again depends on application and budget.

Energy can be collected from the environment, but, so far, batteries have proved to be the most cost-effective and versatile solution.

Getting actionable data from dumb devices to a computer that can help streamline an operation can be done in a cost-effective way. It may seem like a bit of an art, but contemplating the goals and challenges discussed above, will help guide the development or selection of an effective IoT solution – one that can optimize an operation without becoming a financial burden. That means not just considering what to sense or monitor, but also how to connect, power, maintain, and, eventually, scale the system. Planning an IoT solution with these ideas in mind will allow industries of all sizes to understand their environments at a deeper level. This will lead to more widespread adoption of IoT systems and that will significantly change how cities, factories, buildings, machines, businesses, and even our bodies, are run.

Background During the winter, I typically sleep with my windows closed and heat on, and I’m sure this…